Welcome to my new blog.

So, a few years ago I started a blog about my 122. I had the best of intentions to write articles about building the engine and slowly restoring the car, but I just sorta... lost interest in it. 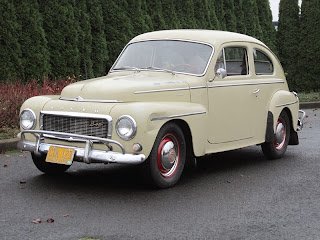 Fast forward a few years: I have a new car to tinker with, and renewed interest in documenting my attempts to fix up this car.

This car comes to me a lot cleaner than my 122 did back in 2007. The biggest problem I have with my 122 is the paint. The previous owner of the car at one point had the car painted, and changed it from the original colour. I'm sure it was fine for a few years, but by the time I got the car (17 years later), the paint was in poor shape, and showing tons of signs of the previous colour.

I finally realized that I was never going to be able to fix up my 122 to a point where I really wanted it to be with out spending an obscene amount of money. I was content with this and continued to enjoy the car. I had built up a monster of an engine, installed a m-41 transmission (4 speed with Overdrive), and quietly put over 100K miles on the car in the span of about 3 years. (Many long road trips add up over time.) 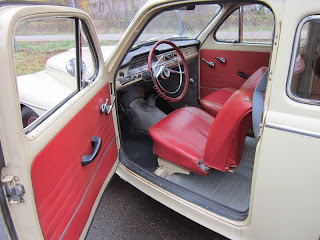 I had made peace with the fact that I'd never have a "pretty" car. Still, in the back of my head, I always longed for something a bit nicer looking. Let's face it, half the fun of driving cars like these are the conversations people will strike up with you about the car. The turned heads, the waves, the smiles. My 122 was not that car. Again, I was fine with this, as the car was still fun to drive.

None of this probably would have changed until about a year and a half ago: Some loser in an SUV hit the back of my beloved 122 at a stop light.

This would be the first of 4 separate accidents I was involved in with that car, none of which were my fault. I got dinged in the front twice, and in the rear twice. The damage to the front of the car was pretty substantial. It was all cosmetic, but it is very noticeable. My 122 had gone from a decent daily driver to a beater car almost instantly.

I decided that it was probably time to look for another car.

I had some criteria for my next car:


I came across a 1964 PV 544 for sale in Eugene, about a 100 miles south of Portland. The car met all the above criteria. This car had sat for some time, but it's very clean, both inside and out. There are a few things that need to be fixed, rebuilt and replaced, but it's nothing major.

This blog will detail the work done on the car. This time, the emphasis will be on video content.

I hope this will be useful for those reading it.
Posted by Dylan Berichon at 9:13 PM